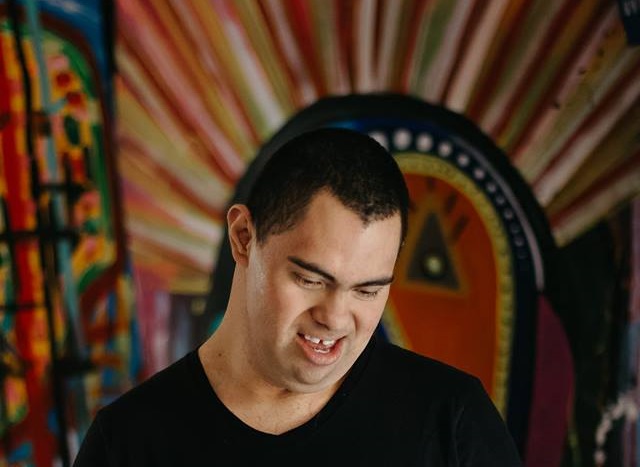 Today is World Down Syndrome Day and we wanted to celebrate an artist with Down Syndrome that is making the world a much more beautiful place. We decided to highlight Alan Téllez, who captivated our attention with his strong lines, fantastic use and pairing of color. Alan Téllez is a Mexican artist who began his career at the age of 17 years old. He studied at the Instituto Municipal de Bellas Artes, Mexico’s world recognized art institute. There he attended painting free workshops and took private lessons from Ángela Uscanga Tiburcio. Téllez had his first art exhibition in 2010 at the Veracruz Institute of Culture, where the press called him “The colorist of dreams”. In 2011, he caught the eye of art curator, Ricardo Camacho who introduced him to José Luis Cuevas. This led to invitations to exhibit his art in several museums in Mexico City and Toluca alongside other famous Mexican artists, such as Vicente Rojo, Francisco Toledo, Guillermo Nierman, Manuel Felguerez among much others. Téllez, whose influences are Joan Miró and Picasso, has focused on painting faces as a desire to show how everyone is different and special in their own way. His works all have direct meaning to his life.

Being involved in social causes is important to Téllez. He has collaborated with several organizations such as the DIF of Veracruz, Boca del Río, (Hurricane Karl), Fundación “Nuestros Manos”, Casa Hogar las Niñas de Tláhuac, and the Down Syndrome Foundation A.C. He is a global Down syndrome ambassador and has spoken at the United Nations. Last year, Téllez presented at the UN with headquarters in New York, invited by the Brazilian mission at the international meeting as part of the celebration of World Down Syndrome Day on March 21, 2017. To learn more about Alan Téllez, visit alantellez.com and follow him on instagram @alantellezpintor.
Art
Alan Téllez, down syndrome, ikouii feature